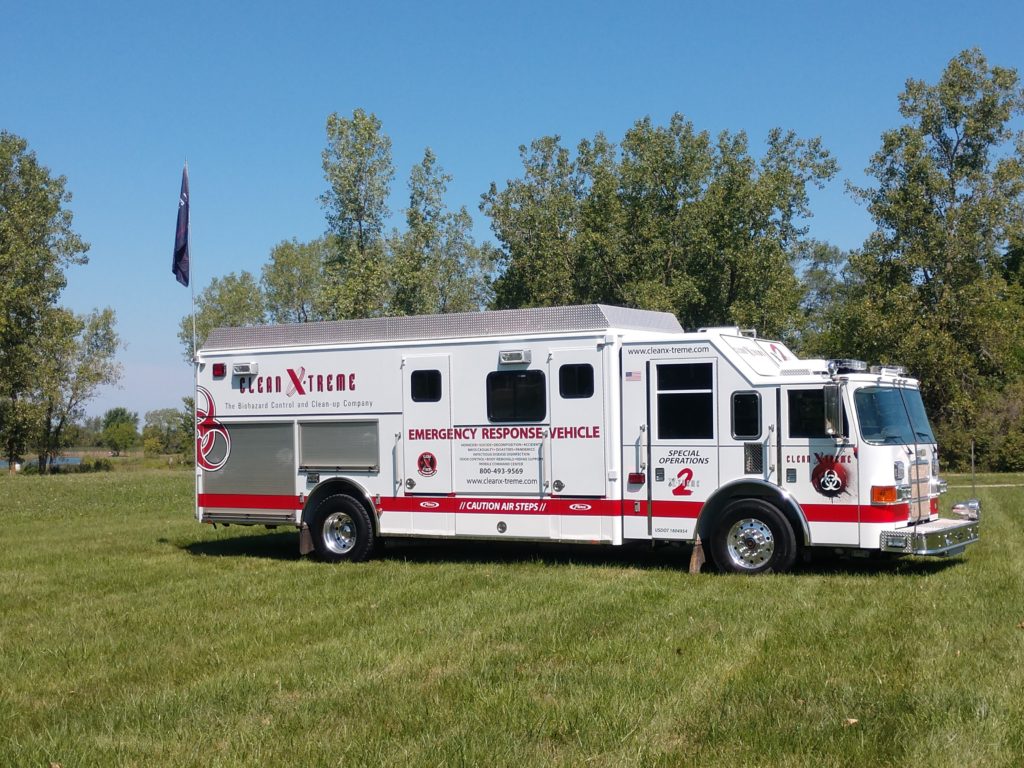 While most Hazmatters profiles focus on teams affiliated with a government entity, this private hazmat operation warrants a closer look.

This 10-employee company out of northeast Indiana specializes in biohazard cleanup, which is to say suicides, murders and human decomposition calls — remnants of those tragedies that most families are ill-equipped to cope with. Their company coffee cup sports the tagline: “blood, guts, brains and remains.”

In fact, the team considers its greatest accomplishment to be helping families cope with a suicide or homicide by handling the difficult task of clean up. That small team is used to help in times of crisis — all its members are active firefighters, medics or other healthcare professionals who work for Clean X-treme on their off days.

“I was the EMS director for my community, and my partner was in charge of supplies and disinfection at our local hospital,” says owner Ray Easterly. “We saw the need for a biohazard clean-up service in our immediate area. We started off slow with a little equipment and one trailer pulled behind a pick-up truck. Today, 24 years later, we have four vehicles on the road and a great team of technicians supporting our operation in three states.”

The most recent addition to the fleet is a completely refurbished 2002 Pierce Enforcer hazmat unit they bought from the Denver Fire Department. After a year of renovations, the rig seats six, has a 15,000-watt PTO generator and a 9000-watt light tower with six 1,500-watt scene lights on three sides.

To support body removal, they have a bariatric body-lift system, a stokes basket, a SKED stretcher and mega movers. They also carry standard, decomposition and bariatric body bags. The rehab team has large water cooled mister fans, sports drinks, coolers and medical monitoring supplies and a refrigerator on board. All areas of the truck are heated and air conditioned.

Like most emergency operations teams, Clean X-treme has felt the pinch of COVID-19. The group has had to adjust their training to mostly online, and, says Easterly, getting enough of the right PPE has been a challenge. “We have had to become very resourceful in finding PPE that meets our needs” he says.

Tell us about your team

Want to see your team on Hazmatters?

Tell us about your team and get some merch!
Click Here

Biohazard Technicians with ABRA and IICRC

Annual company-wide training plus classes throughout the year